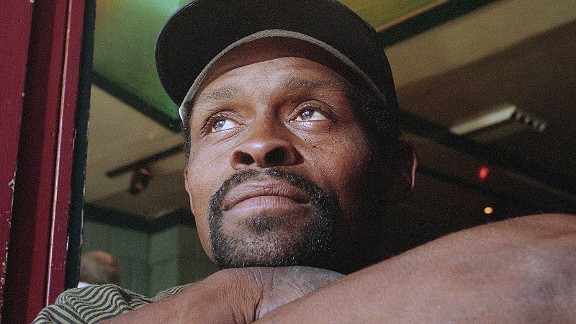 AP Photo/Mark Hundley)
In 2013, the world was ready for Jason Collins’ announcement. Glenn Burke, above, lived in a totally different time.

The world is throwing a parade for Jason Collins, the 7-foot free-agent NBA center who came out last month. He was hugged by Oprah, celebrated by “Good Morning America,” and congratulated by President Obama.

But nobody seems to remember baseball’s Glenn Burke, who tried to come out nearly 40 years ago and was stuffed back in.

“How’s Jason Collins going to talk about being the first?” says Burke’s agent, Abdul-Jalil al-Hakim. “Glenn Burke was the first. And he wasn’t any free agent, either. He was in the lineup.”

Glenn Burke was a barrel-chested jokester, a singing, dancing, one-man cabaret. His teammates called him King Kong. In high school, the 6-foot Burke could dunk two basketballs at once, in street shoes. He roamed center field for the Los Angeles Dodgers and the Oakland A’s in the late 1970s. Burke was the pulse of the clubhouse. He wore a red jock. He’d jump in the backs of pink Rolls-Royces after games. He invented the high-five (with Dusty Baker). Oh, yes, he did.

He was as out as an athlete could be in the mid-1970s. It wasn’t that he was flaunting it. It was that he couldn’t keep it in.

“When we’d land at airports,” remembers Davey Lopes, the Dodgers’ second baseman. “There’d always be guys waiting for Glenn. We’d go our way and he’d go off on his merry way. We’d go to clubs and women would hand him their numbers. But he’d never call ’em. Didn’t matter to us. We loved him.”

“Nobody tripped that he was gay,” says Burke’s longtime pal, Doug Harris, who produced the documentary “Out” about Burke in 2010. “The people who tripped off it were the Dodgers [management]. They didn’t want to talk about it. He was trying to tell the reporters, but they said they couldn’t write that stuff.”

“Out. The Glenn Burke Story”

The atmosphere in Burke’s time was far more hostile to gays than it is in Jason Collins’ time. Few gay characters in movies. No states where gay marriage was legal. “You couldn’t put [anything] gay in an ad or anything,” remembers al-Hakim. “That was a no-no. The reporters didn’t want to write it. You couldn’t go there.”

Glenn Burke was so out that the Dodgers’ front office finally called him in, laid a $75,000 check on the desk, and offered to pay for his wedding if he’d just get married — soon.

“I guess you mean to a woman, right?”

Then he walked out, without the check.

“Glenn told me he wasn’t the first Dodger called in and presented a check,” says childhood friend Vince Trahan. “They’d done it with gay players before. The difference was Glenn didn’t take it.”

None of this helped his career. Nor did palling around with Dodgers manager Tommy Lasorda’s colorfully gay son, Spunky, according to Burke’s 1995 autobiography, “Out at Home.”

But friends of Burke’s say they were never a couple, despite what you’ve read. “Glenn never had an intimate relationship with Tommy’s son,” says Trahan. “He wasn’t attracted to the real flamboyant types.”

Didn’t matter. Next thing Burke knew, early in the 1978 season, he was traded to pitiful Oakland, despite Lopes and others walking into the office of general manager Al Campanis to complain.

A year and a half later, during spring training, new A’s manager Billy Martin greeted Burke by sitting his team down in center field, pointing to Burke and saying, “Boys, this is Glenn Burke. He’s a f—–.”

That’s when everything stopped being so funny. 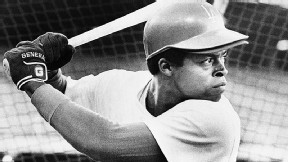 “In those days, a guy did one of two things when a friend was out,” says Lopes, now the Dodgers’ first-base coach. “He’d either support him, or the pendulum would swing the other way and he’d avoid him. A lot of ballplayers back then would stay away. Guys were afraid somebody would start saying the same thing about them.”

Cue the movie montage: Catcalls from fans. Latino players mumbling a gay slur in Spanish under their breath. Nobody within 20 feet of him in the showers.

Injured, he packed his bag for the minors — Utah to be exact.

To a partying gay ballplayer from Berkeley, a minor league team in Utah is hell on earth. Twenty-five games into the 1980 season, Burke and his tortured .237 batting average retired, after only four years in the major leagues.”Had he taken that check the Dodgers offered,” says Trahan, “his career would’ve gone on and on. He could’ve relaxed and played great baseball. But he wasn’t going to lie. He was going to be true to who he was.”

He was welcomed into The Castro as a conquering hero. “They can’t ever say now that a gay man can’t play in the majors,” he’d brag, “because I’m a gay man and I made it.”

But soon enough, he stopped making it. He became depressed. He became a cocaine addict. Then homeless. Then he contracted AIDS. He died in 1995, at 42. They buried King Kong in Oakland, under a small stone, grave No. 3171.

Jason Collins came out of the closet and was put on magazine covers. Glenn Burke came out and got covered up. The president never called.

You say Glenn Burke was born too soon, but that’s not exactly right. The problem was all the people born without the courage to stand up for a friend, a colleague, an employee.

Yes, Jason Collins was courageous to come out. But if others back then had the guts Glenn Burke had, Collins wouldn’t have needed courage at all.

KGO Radio Conversation On ”OUT. The Glenn Burke Story“